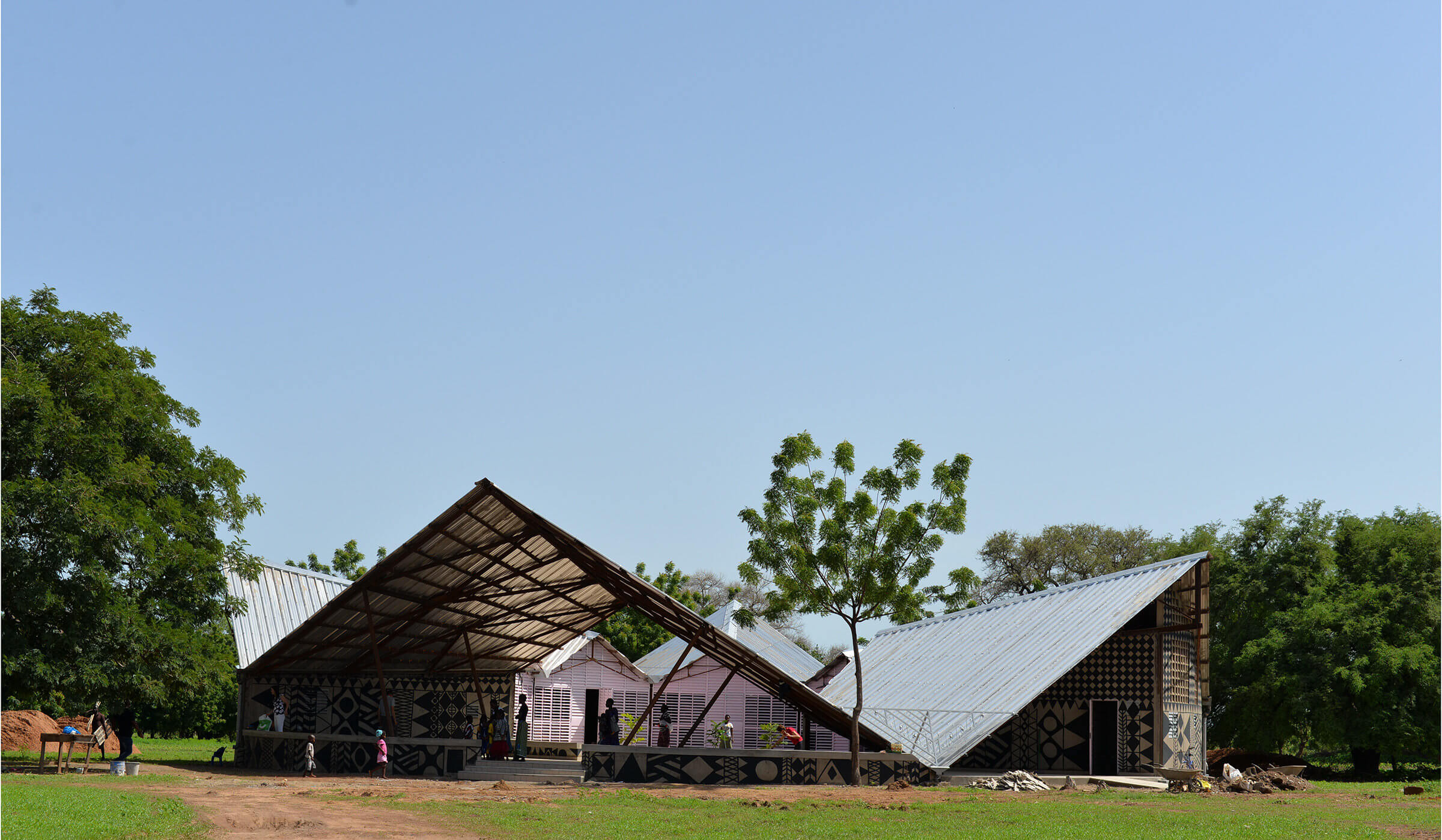 Local building traditions in Burkino Faso and their strong formal identity were the inspiration of the architectural language of the school and its built expression combines the lightness of roof waves with heavy walls of earth and clay that protects the rooms from the intense heat. The plan of the building echoes the village’s dense layout, with its different family houses gathered around an inner yard where animals pasture.

The school is designed to accommodate 120 kids between the ages of 2 and 6 years and comprises four classrooms, an office, three sanitary spaces, a large multi functional room with a kitchen and an outdoor courtyard.

The school’s prominent canopy roof is shaped like a folded piece of paper, gliding over the red soiled ground and giving shadow to a variety of rooms. A network of steel trusses supports the thin corrugated iron sheets and provides for a double roof that are naturally ventilated through open “ventilator” blocks in the upper level and the outer walls. The wall facing the inner courtyard is made from steel lamellae that can be fully open. Solar panels feed the fans, supporting extra ventilation in the classrooms during extreme periods of heat. The construction is produced as a kit for efficient assembly. During the rainy season during the summer months, water is collected from roofs in closed tanks in the ground.

At the heart of the project one finds the circular courtyard which recalls of universal infrastructures of gathering. In its centre, three young trees have been planted which surround the essential water pump. A pink tone softens the courtyard space, while ceramic tiles cover the office, toilet, classrooms and open space floors.The peripheral walls are decorated by local craftsmen with a variety of different patterns, each of them holding a symbolic meaning for people of the region.

The school provides a new life to the village that was in dire need for a new educational center. The close collaboration between the charity organization, the local teachers and municipality of Sabou, local craftsmen and the architects was integral in executing the project. It is a veritable case study in how programs such as this offer one of the most efficient ways to combat poverty in similar regions. It represents a community driven development that contributes to the strengthening of local environments, giving the local population the opportunity to take charge of their own destinies.

Previous
This Modular Shelving System is Made of 4,276 repurposed chopsticks