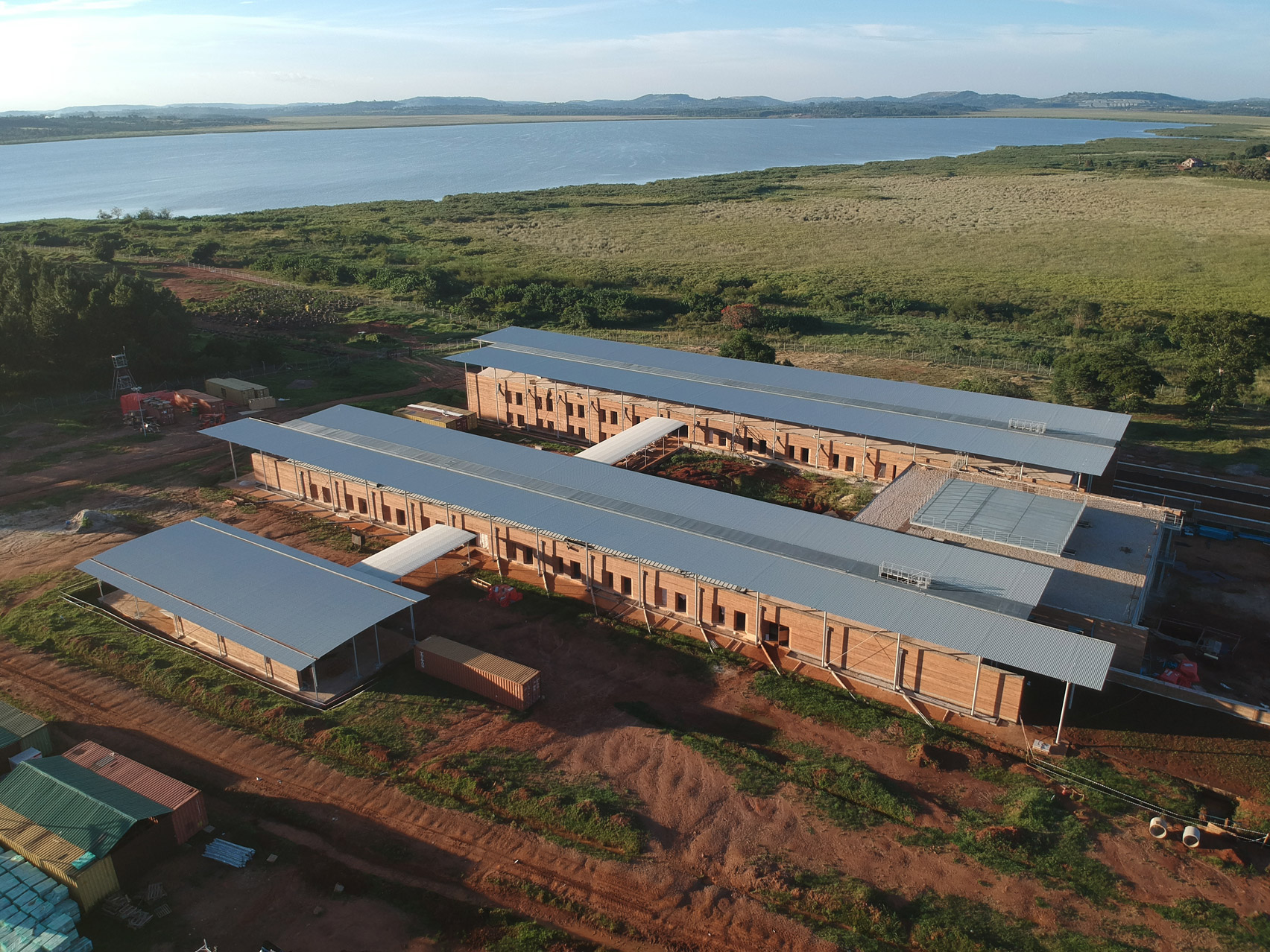 The Centre of Excellence in Paediatric Surgery is a medical treatment facility for children located in Entebbe, Uganda, on the banks of Lake Victoria.

Designed (pro bono) by the Renzo Piano Building Workshop (their first project in Africa) in collaboration with the TAMassociati studio for the global NGO, Emergency, the centre features three operating rooms with a capacity for 78 beds and is sited on a plot of land donated by the Ugandan government.

Currently in its 3rd year under construction, the center features prominent load bearing wall built with rammed earth, a traditional building technique that makes use of raw earth to make the building resistant to heat and keep temperature and humidity constant inside. The hospital will be powered by 2,600 photovoltaic solar panels for electricity as well as thermic solar panels for hot water.

The centre will provide free treatment and act as a centre of referral, for patients throughout Uganda and children in need of surgery from all over Africa. It will also serve as a training centre for young doctors and nurses from inside and around the country.

Our vision of Africa has recently undergone a slow but steady development, from neglected continent to the new frontier of an evolving world. The challenge of this new project of Emergency NGO is to combine the practical requirements of a paediatric surgery hospital in Africa with the desire to create a model piece of architecture: rational, tangible, modern, beautiful, but firmly linked to tradition. It will be more than a mere hospital: it will be the first architectural work in Africa designed by someone who, over the past decades, has actually written the story of architecture. This project is a sign of extreme symbolic importance for the promotion of health care and culture in Uganda, and in the entire Africa.

The building will follow the curves that slope down to the lake. By following the course of the land, the hospital walls and the boundaries of its outdoor pathways will form terraces on which the hospital itself will stand, in a spatial continuum between interior and exterior, above and below. The stacked walls will break the distinction between the various zones, creating a unity between the lake, the park and the internal hospital environment.

Earth is the raw material used to build the homes of the poorest people in most parts of the world. It’s a simple, cheap building technique but one which, in Africa, is associated by most people with a past of poverty that needs to be forgotten. We were fascinated by the idea of giving back some dignity to this technique, using the excavated land to build the load-bearing walls with the rammed earth technique. The rammed earth technique is an ancient building method involving a mixture of earth, sand, gravel, binding agents and a little water, compressed in wooden or metal frames or moulds. The great advantage is that the material is available locally, and there’s no need for cement or highly specialised workers. An eye on sustainability, right from the construction phase.

This building, born from the earth, will get its energy from the sun. Indeed, the roof will be made from a suspended trellis structure supporting 9,800 square metres of photovoltaic panels (equal to the surface of a football pitch). This system will ensure that the hospital has an autonomous electricity supply during the day. It will also be connected to the main line, to provide energy to the surrounding area at times when consumption is low. The photovoltaic roof, “floating” above the building, will also guarantee shade for the hospital and all the uncovered walkways.

Next
Boogertman+Partners launches a first in Africa. FuturePart, an inter-disciplinary platform for rigorous research and experimental design thinking.