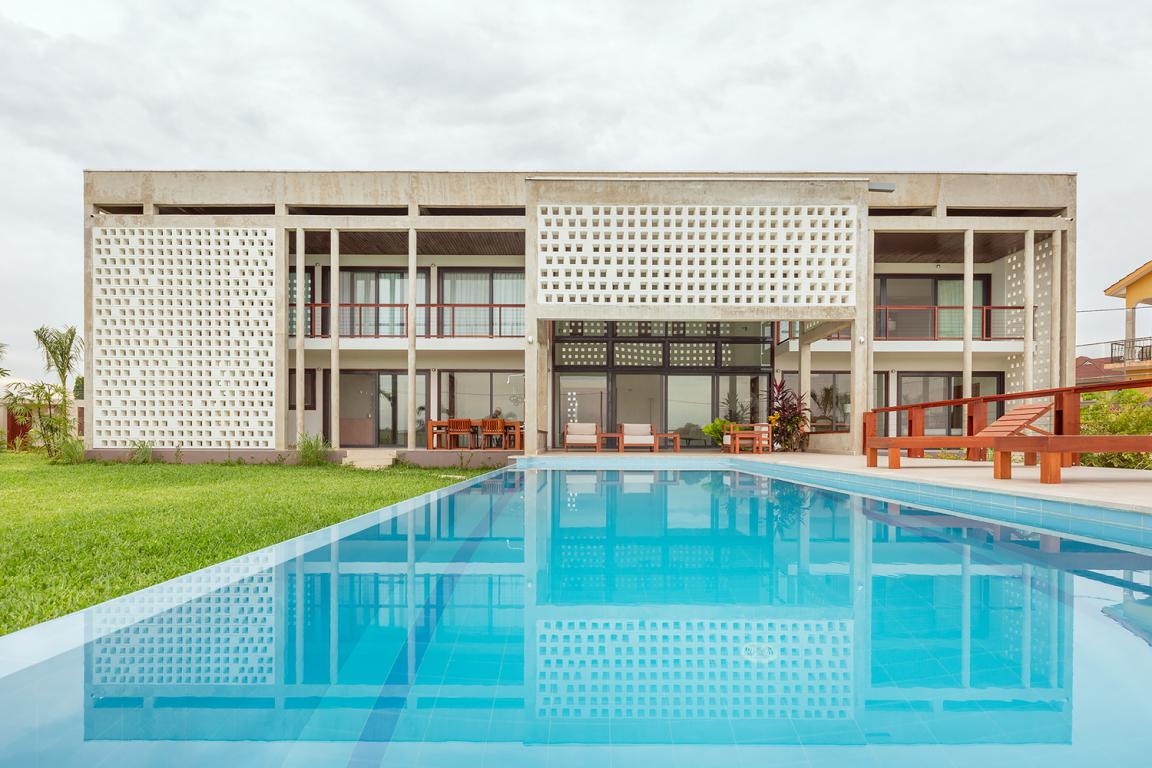 The Mbweni House is a 296sqm, 5 bedroom home, situated in a former military zone on the Northern Coast of Dar es Salaam, about 30km away from the city centre.

The area has been redeveloped as an upmarket residential neighbourhood in which, according to 21st century Tanzanian fashion, Western architectural typologies have been followed by many. This has resulted in a monotonous low density area with no particular characteristics.

This home, on the other hand, sets itself apart from this Westernised ‘copy-paste’ housing by evoking austerity in a modest, but distinct building volume. Designed by FBW Architects Netherlands, the project responds to its specific climatic and cultural environment through its autarchic and vernacular design. The building has been designed as a longitudinal box inside a box and is situated diagonally on a platform to ensure a long vista. It is a complete double scheme with double facades and an inverted roof over a flat roof.

The inner box of the building remains rectangular whereas the outer layer protrudes on two sides towards the garden, thus becoming a cross. By using a double skin, the house is protected against direct sun, but the outer wall is also permeable and allows for a subdued light quality and attractive light pattern throughout the day. The inverted roof collects rainwater in a large cistern for domestic use and a park of solar panels on the roof provide electricity and hot water. The building is kept within its footprint and the garden is complementing this by, at times, mirroring interior to exterior.

The green creates the overall backdrop of the building and an optimal microclimate is ensured as hard landscaping is minimalised and strategic vegetation acts as shading and filtering system. Altogether, this results in a sustainable and resilient composition. In addition to the Colonial Planters’ house inspired vernacular approach, the design also reimagines elements of the traditional Coastal Swahili House typology. The verandas, loggias, balconies and galleries that are part of the double façade create an intermediate world between the garden and the interior.

They allow for an interplay between private and public, highlighting the intricate and rich threshold condition that exists within local architecture and supports the Swahili lifestyle. Moreover, besides acknowledging the physical context, the building layout answers to its exceptional program: a retiree and foster parent, two young Tanzanian students and a Tanzanian female caretaker all living under the same roof.

For this reason, public and communal areas are located on the ground floor whereas private spaces are distributed and separated on the second floor. All in all, the traditional Coastal Swahili House and the vernacular Colonial Planters’ house might have been the inspiration for this project and resulted in a context and climate responsive design, the translation of these age-old architecture styles are done in a contemporary fashion providing 21st century comfort and prestige.

Want to get your project published? GET STARTED HERE