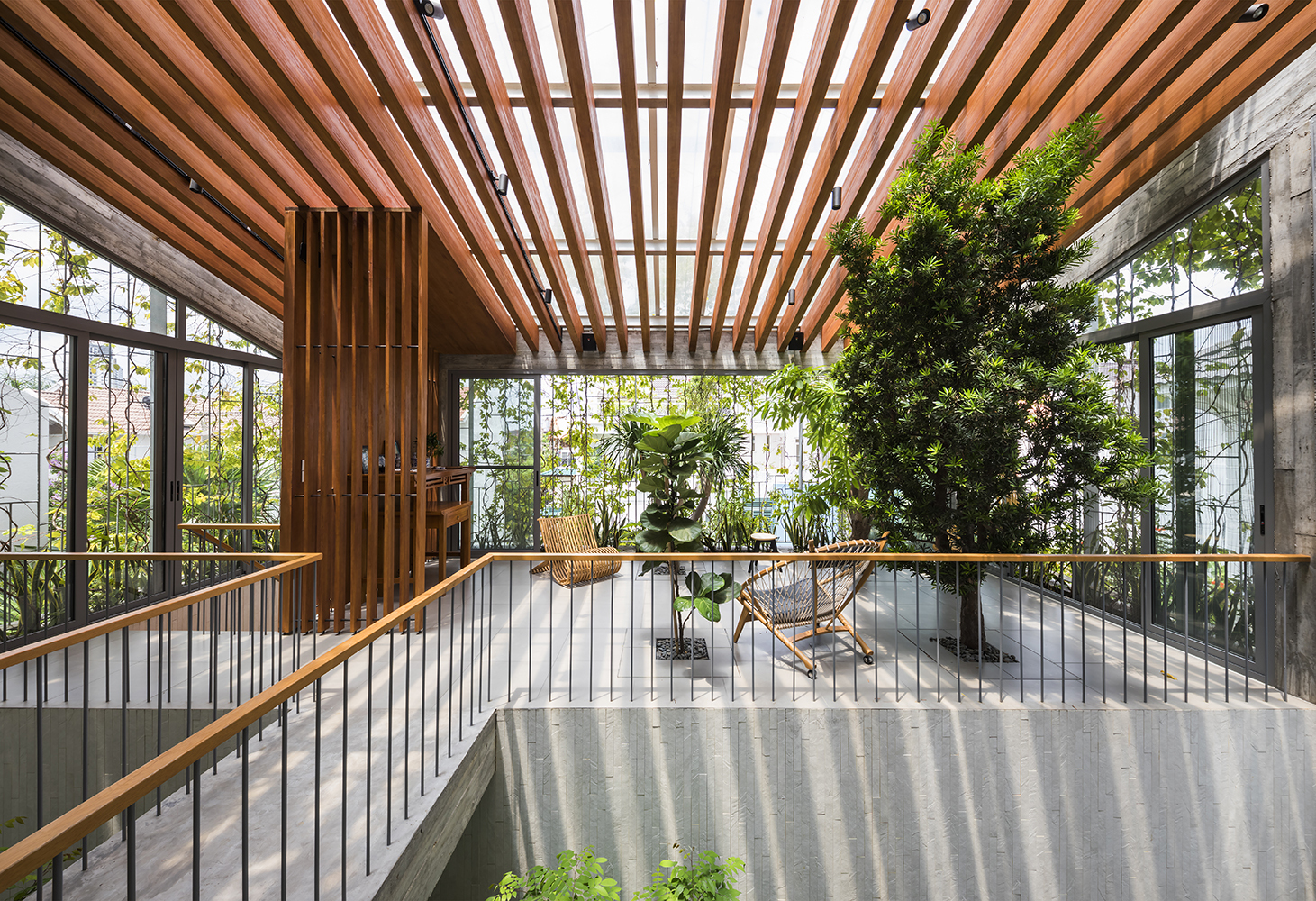 The Stepping Park House in Ho Chi Minh City, Vietnam, is the latest in the “House for Trees” series by Vo Trong Nghia Architects, which seeks to reintroduce green spaces into the country’s increasingly high-density urban areas.

The most prominent feature of the Stepping Park house is a large central void around which functional spaces are planned. Each of the adjacent spaces are filled with an abundance of trees and plants, which are incorporated into pebble-lined panels in the floor. The void on the other hand facilitates natural ventilation, provides natural light, and encloses all of the building’s circulation – including a discreet staircase the leads down to a hidden basement.

The site is located in a new residential area of Ho Chi Minh City, with a park on its northern side. It is a rare opportunity to get a site in Ho Chi Minh city, which is adjacent to a green public space. We therefore focused on designing a house which becomes an extension of its environment by integrating the green of the park into the interior space of the house.

A large void was created by cutting the volume through the three floors, in the diagonal direction of the section. On the ground floor, the void serves as living room, open to the park; on the top floor as a green covered family room. The façade surrounding the void is covered with ivy plants. Louvres provide shadow on the top floor. The void incorporates both circulation elements and natural elements like plants and trees, providing the private rooms with additional natural light. It gives a feeling of continuity of the park, to all three floors of the building. The house aims to create an environment similar to a forest, despite being indoors.

Contradictory to the common spaces, private rooms such as bedrooms are placed in solid volumes. Planting trees in the opening of these volumes blocks direct sunlight, cools the wind and brightens up the interior space with green.

The void that is opened diagonally upwards brings natural ventilation through the house, as a result of the chimney effect. In that way the use of air conditioners is minimized. Walking through the space, one will feel the wind moving from the living room to the top floor of the house. Green facade eases the intense sunshine of the tropical climate. The model becomes a precedent for housing in tropical climates.

This house is one of the latest projects in a housing series called “House for Trees”. The shortage of green space in Vietnam is causing environmental problems such as urban flooding, overheating and air pollution. Presenting a solution to this problem is an urgent challenge that architecture needs to address.  VTN architects integrates green as much as possible even in small houses, creating pockets of park in the city, and eventually aim for the “green building” to spread to the world.

“It is a rare opportunity to get a site in Ho Chi Minh city, which is adjacent to a green public space,….We therefore focused on designing a house which becomes an extension of its environment by integrating the green of the park into the interior space of the house. It gives a feeling of continuity of the park, to all three floors of the building, and creates an environment similar to a forest, despite being indoors.”

Previous
Kaira Looro Architecture Competition for a Peace Pavilion in Senegal, A memorial for the Innocent Victims of War in Africa

Next
Clever Upgrades to Make Your Home Functional and Chic