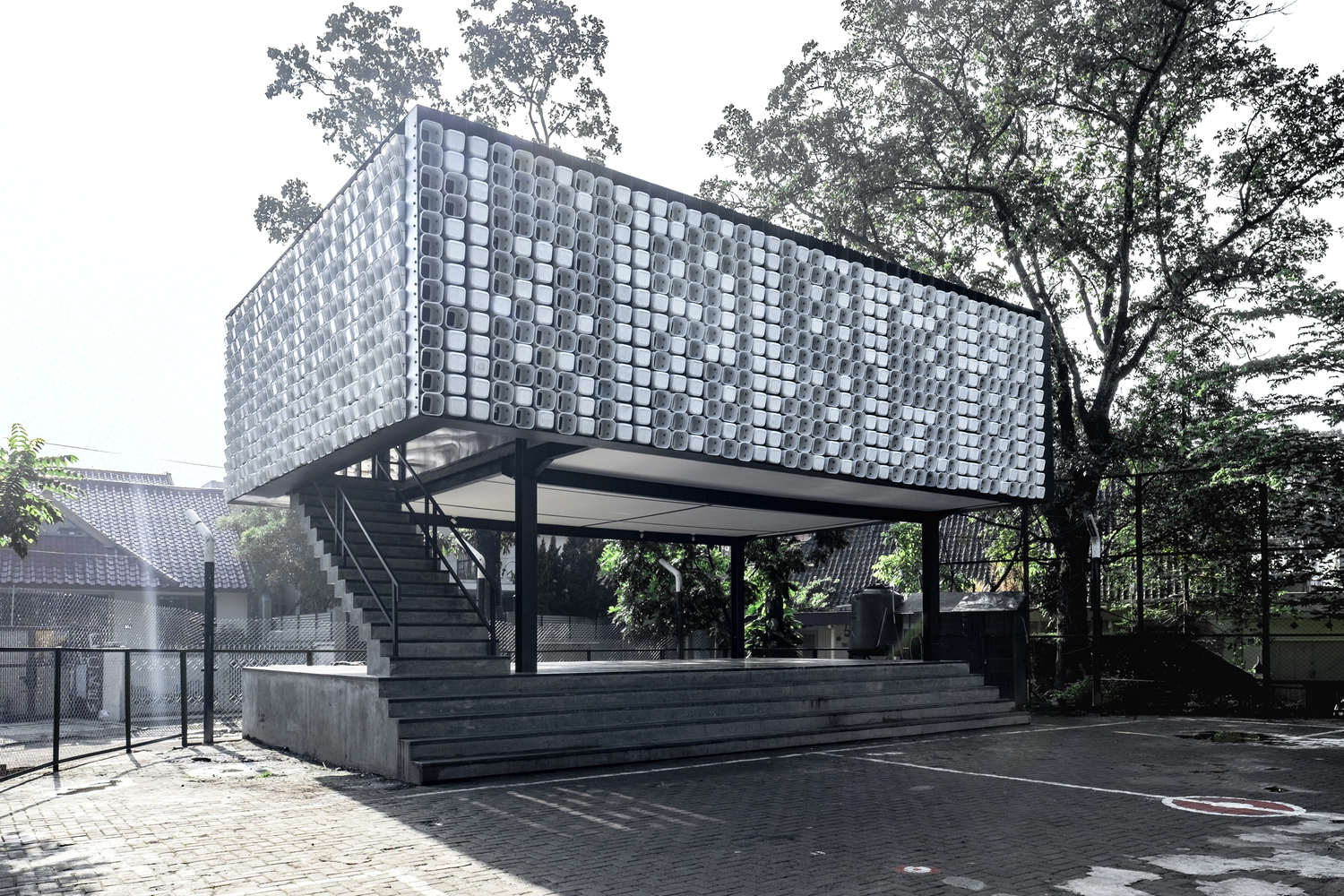 This microlibrary in Badung, Indonesia, is the first of a series of microlibraries by the Indonesia office of international architecture practice, SHAU in collaboration with the host community.

The concept behind the library raises the functional reading space to the first floor level, freeing up space on the ground for multiple functions. The stairs leading up to the library space also double as seating for this ground floor pavilion. The most notable feature of the library would be the facade which makes use of used ice cream buckets. The buckets are arranged in a code-like pattern that offers a message “buku adalah jendela dunia”, which translates to “books are the windows to the world”. The total construction cost of the 160 sqm library is pegged at €35 000 (approximately N14 500 000)

The Microlibrary is located at Taman Bima, Bima Street in Bandung in a small square in a Kampung neighborhood near the airport. The neighborhood consists of middle class housing on one side and a Kampung (village) like structure on the other, where less affluent people live. The Taman Bima Microlibrary is the first realized prototype of a series of small libraries in different locations throughout Indonesia, which we intend to build.

With an Interest in books and reading declining in the past years, the illiteracy rate and school dropout rate in Indonesia remains high. Our mission is to rekindle interest in books by offering a dedicated place for reading and learning, availability of books, other media and courses. The Microlibrary adds identity and is a source of pride for all the people in the neighborhood. The activities and teaching are currently supported and organized by Dompet Dhuafa (Pocket for the Poor) and the Indonesian Diaspora Foundation. However, the ultimate goal is to enable the local people to organize the content and maintenance independently. 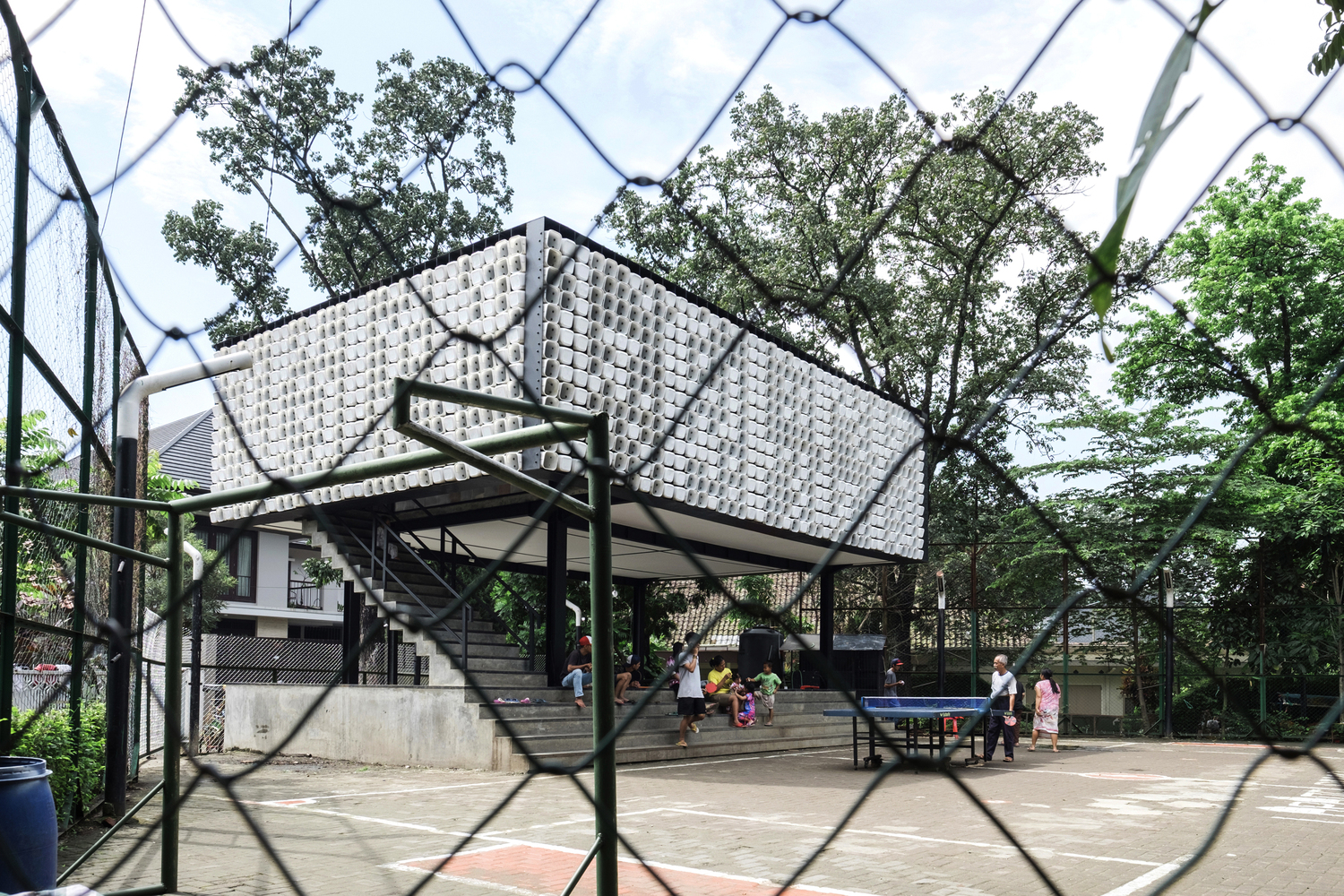 The building is situated in a small square with a preexisting stage that  was already used by the local community for gatherings, events, hanging out and sports activities. Our intention was to add rather than take away, so we decided to enhance the open stage by shading it, making it rain protected and cover it in form of the floating library box.

The building is constructed via a simple steel structure made from I-beams and concrete slabs for floor and roof. The stage was reworked in concrete and a previously missing, wide stair was added. As the building is located in a tropical climate, we aimed to create a pleasant indoor climate without the use of air conditioning. Therefore, we looked  for available façade materials in the neighborhood that were cost efficient, could shade the interior, let daylight pass and enable enough cross ventilation. Initially, we found several small vendors selling used, white and translucent jerry cans. However, prior to construction the jerry cans were no longer available in the quantities we required. Instead, we found used plastic ice cream buckets that  were being sold in bulk.  This turned out for the better as they have a more positive image and are more stable when cutting the bottom open for cross ventilation. 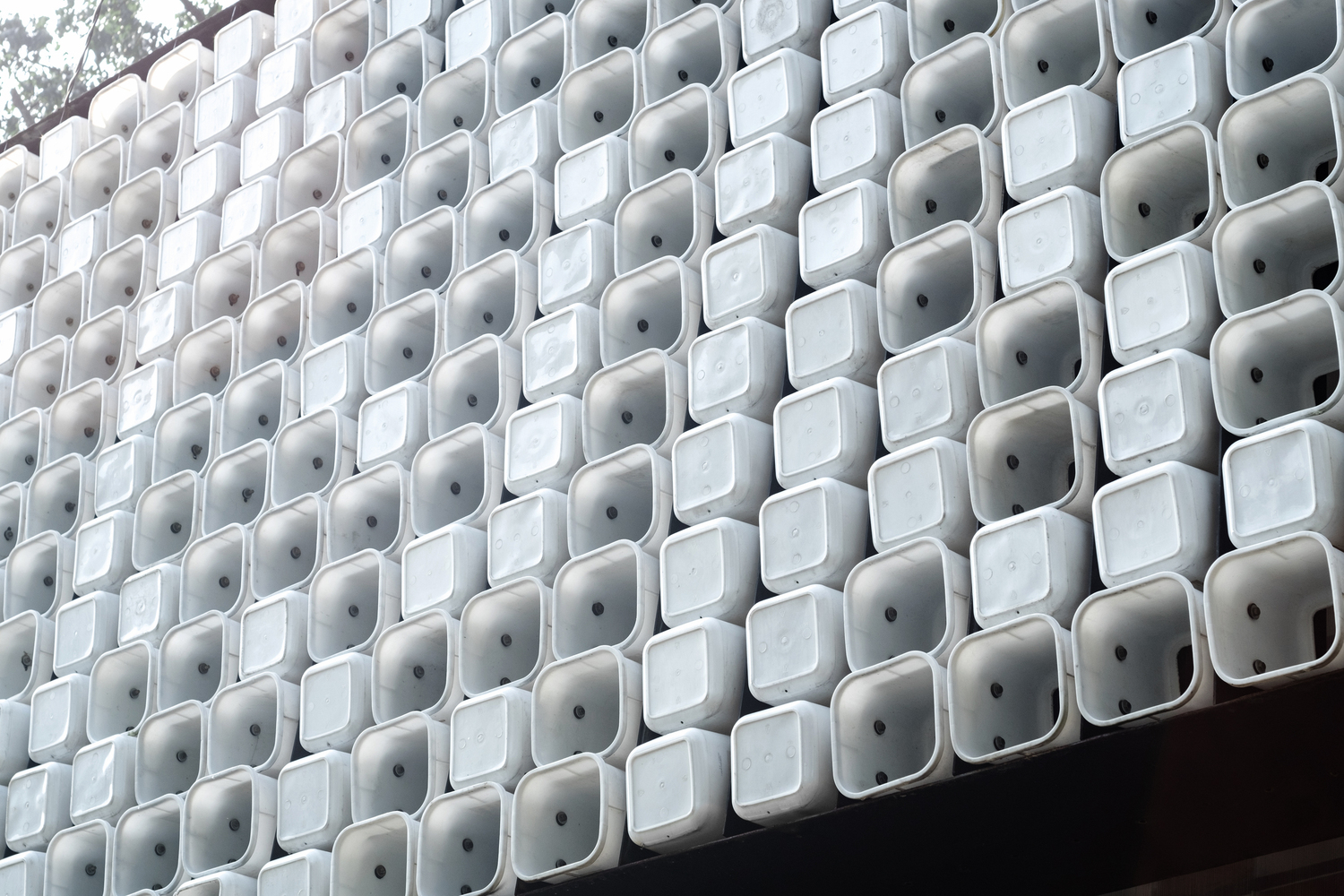 While studying design options of how to arrange 2000 ice cream buckets, we realized that  they could be interpreted as zeros (opened) and ones (closed), thus giving us the possibility to embed a message in the façade in the form of a binary code. We asked the Mayor of Bandung, Ridwan Kamil, a supporter of the project whether he had  a message for the Microlibrary and neighborhood and his message is: “buku adalah jendela dunia”, meaning books are the windows to the world. The message can be read starting from the top left (facing the front) and spirals  down around the perimeter repeatedly. Not only does the facade give additional meaning to the building but the buckets also generate a pleasant indoor light ambiance since they scatter direct sunlight and act as natural light bulbs. 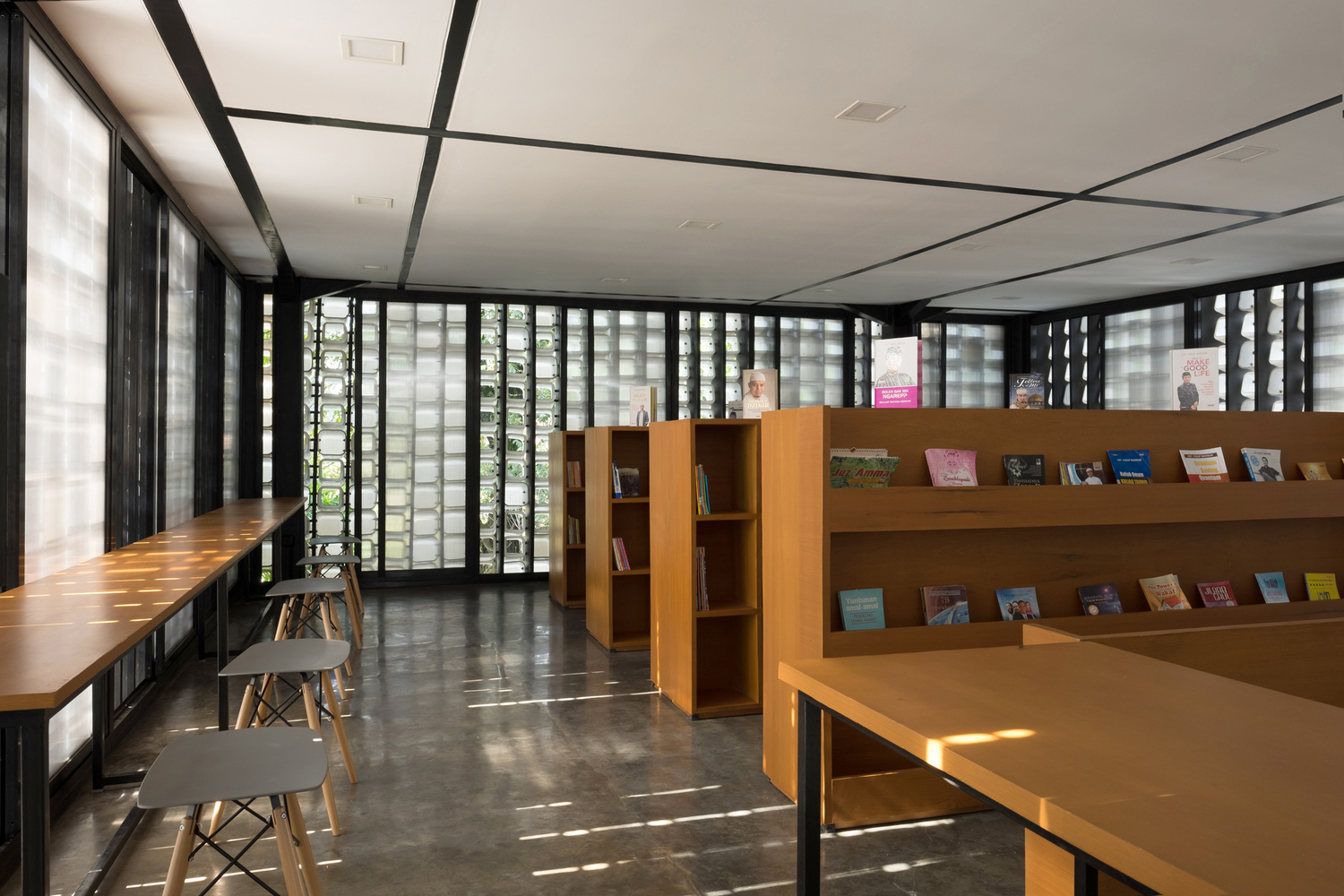 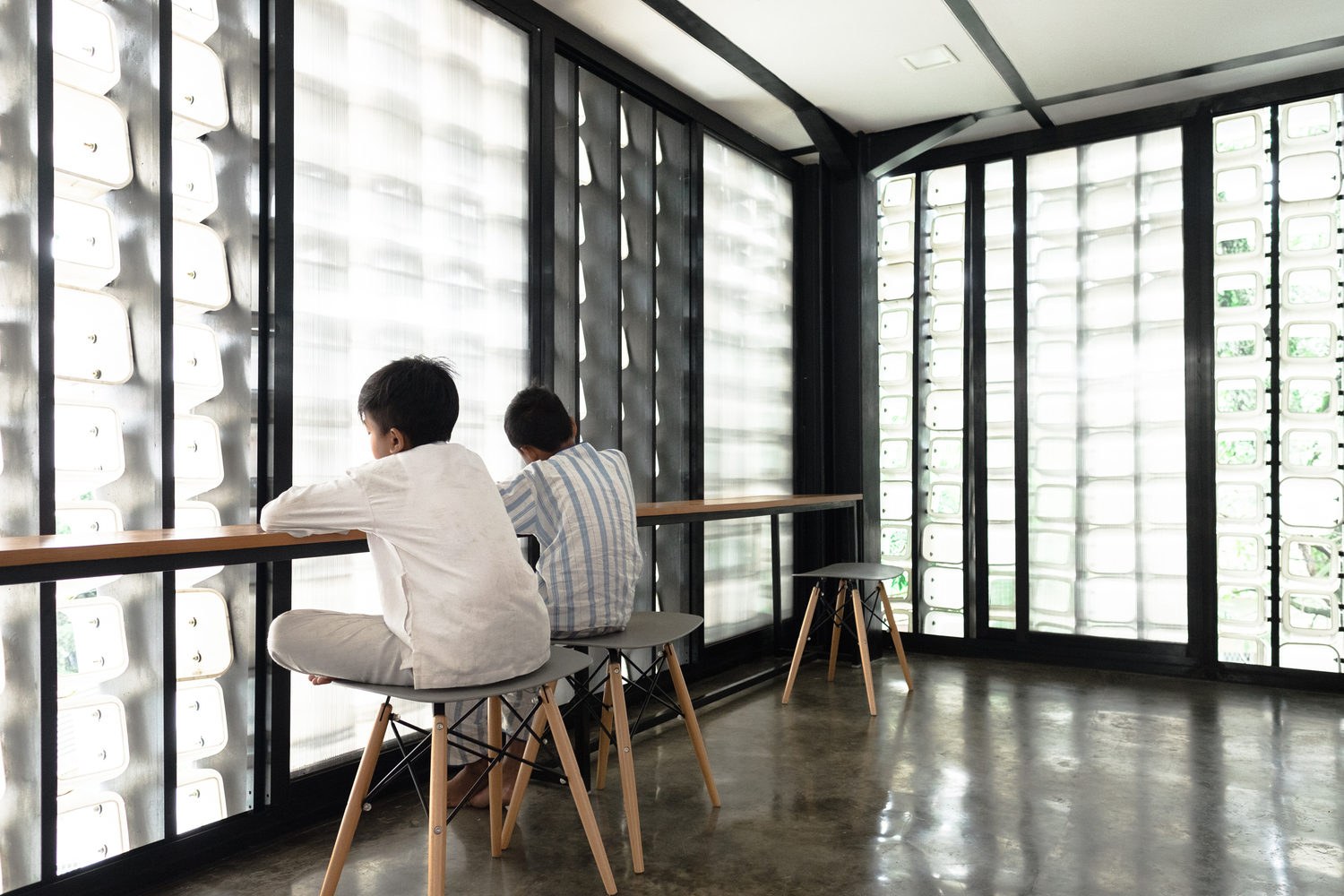 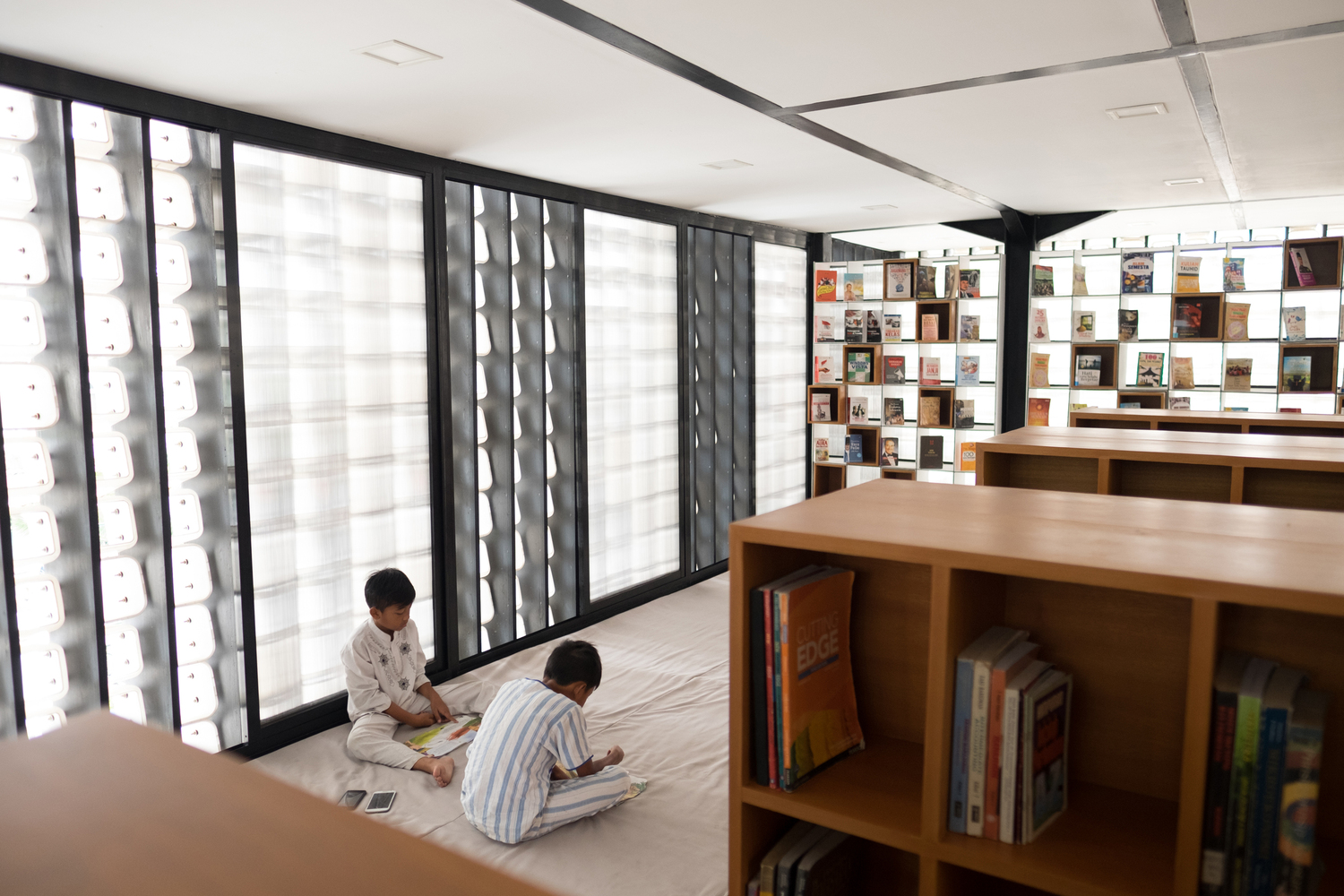 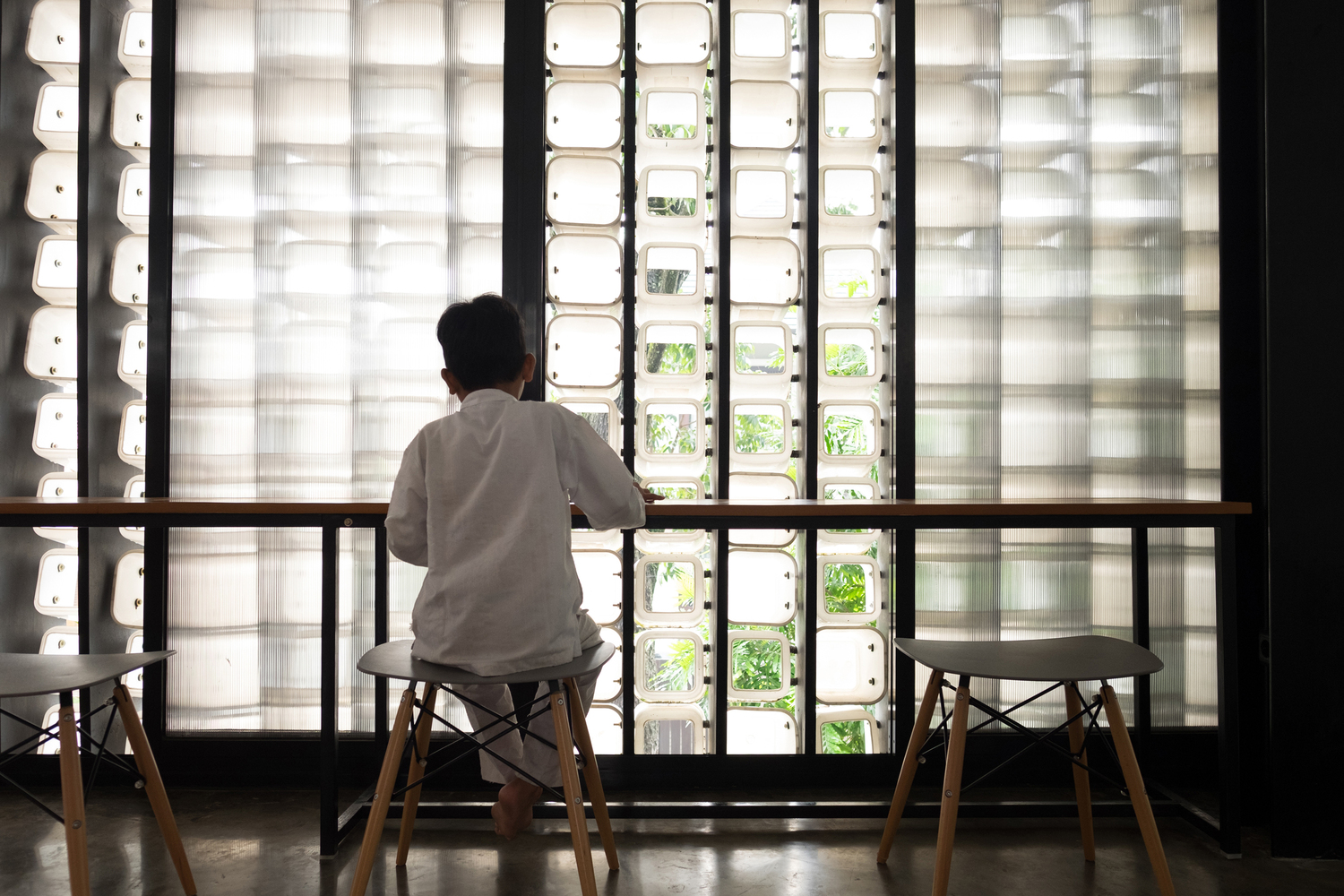 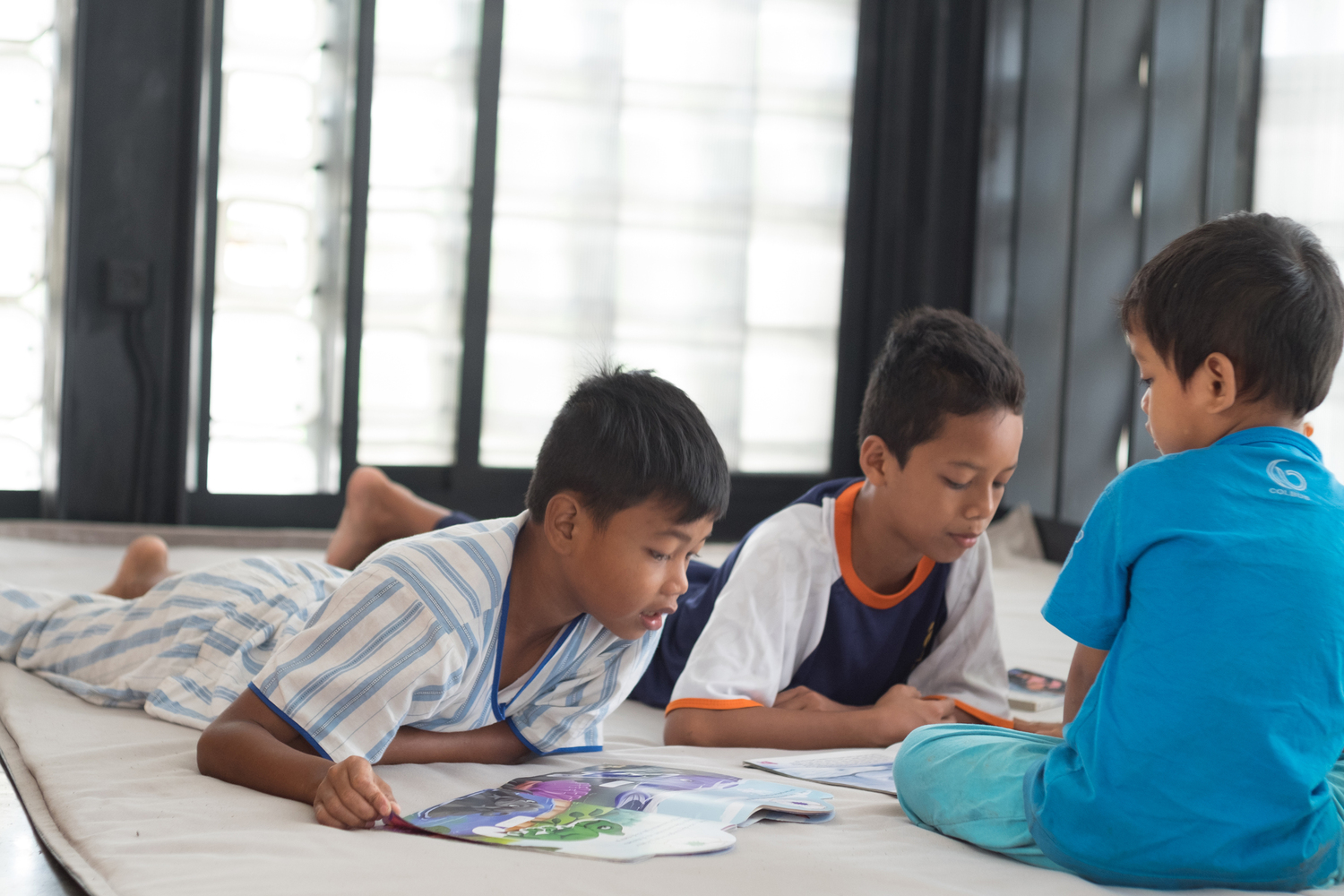 The buckets were then placed in between vertical steel ribs spanning from floor to roof and are inclined towards the outside to repel rainwater. For more harsh tropical rainstorms translucent sliding doors in the inside can be closed temporarily. Mounting 2000 buckets, making the fixture and punching out bottoms of more than half of them is time consuming. However, the local craftsmen made their own punch out/cutting tools to be faster while also maintaining  sharp and clean edges. 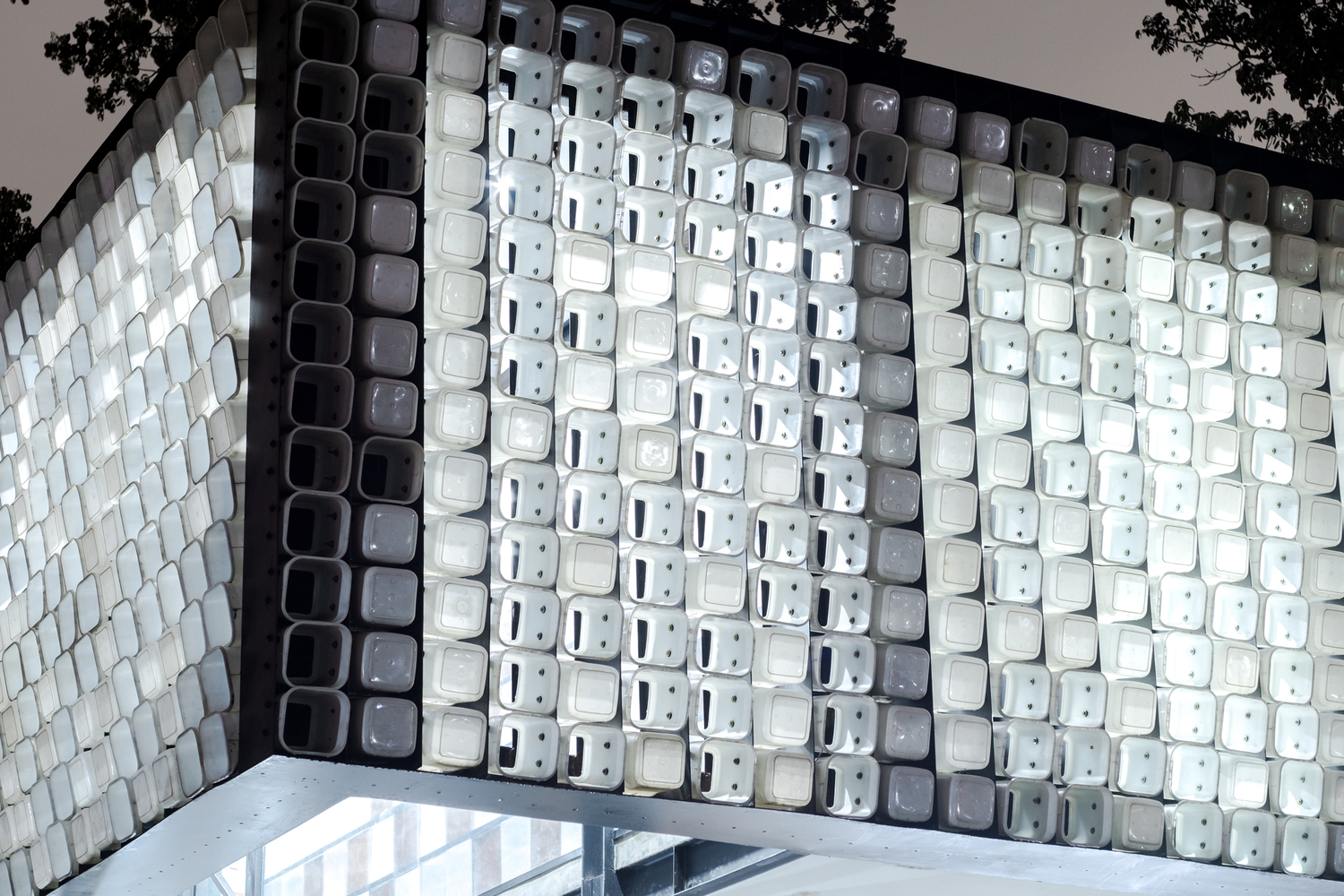 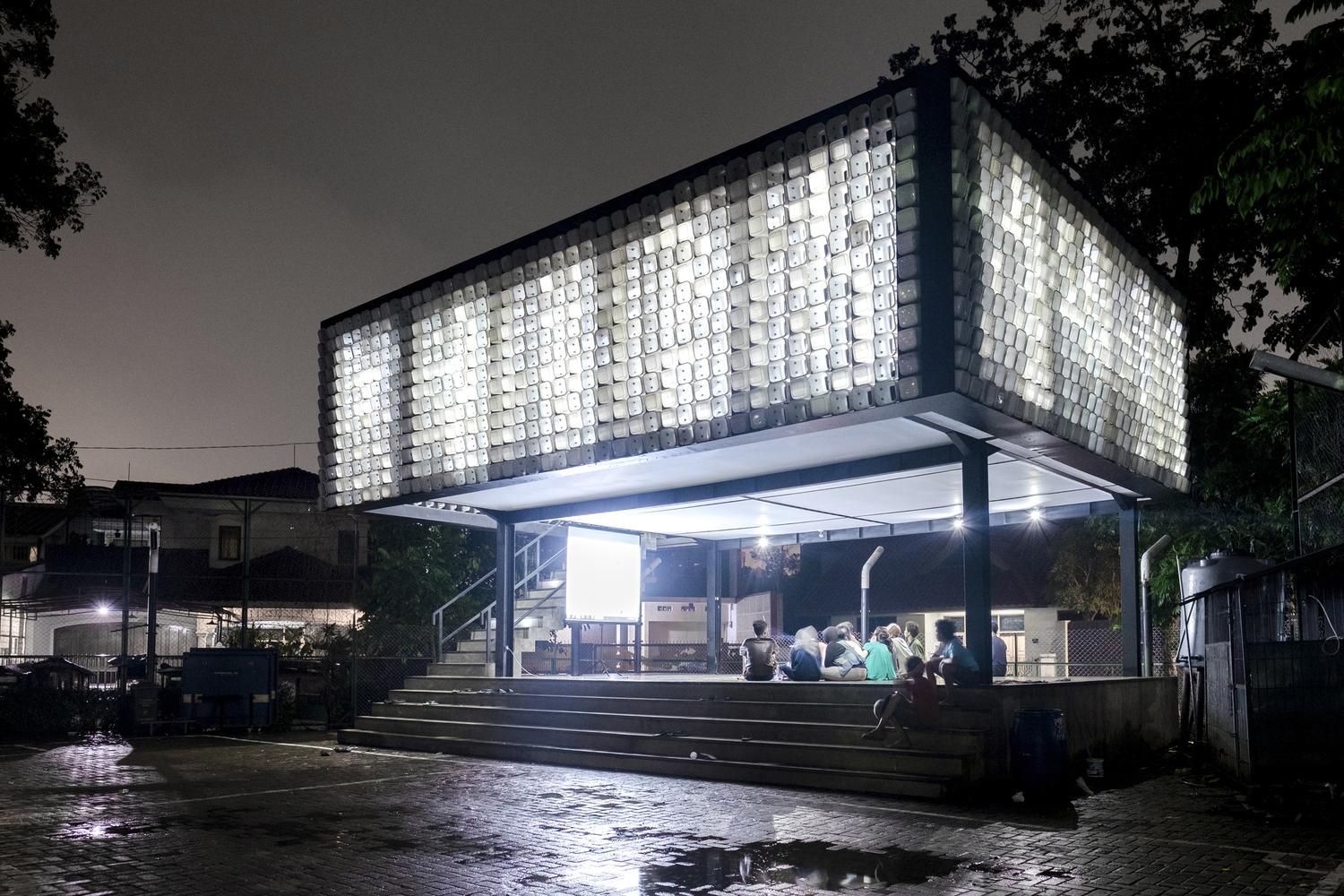 Previous
A look inside Cubana Lagos, a luxury nightlife destination designed by Andrezini

Next
Discover new furniture and furnishing at the IGF Expo 2018