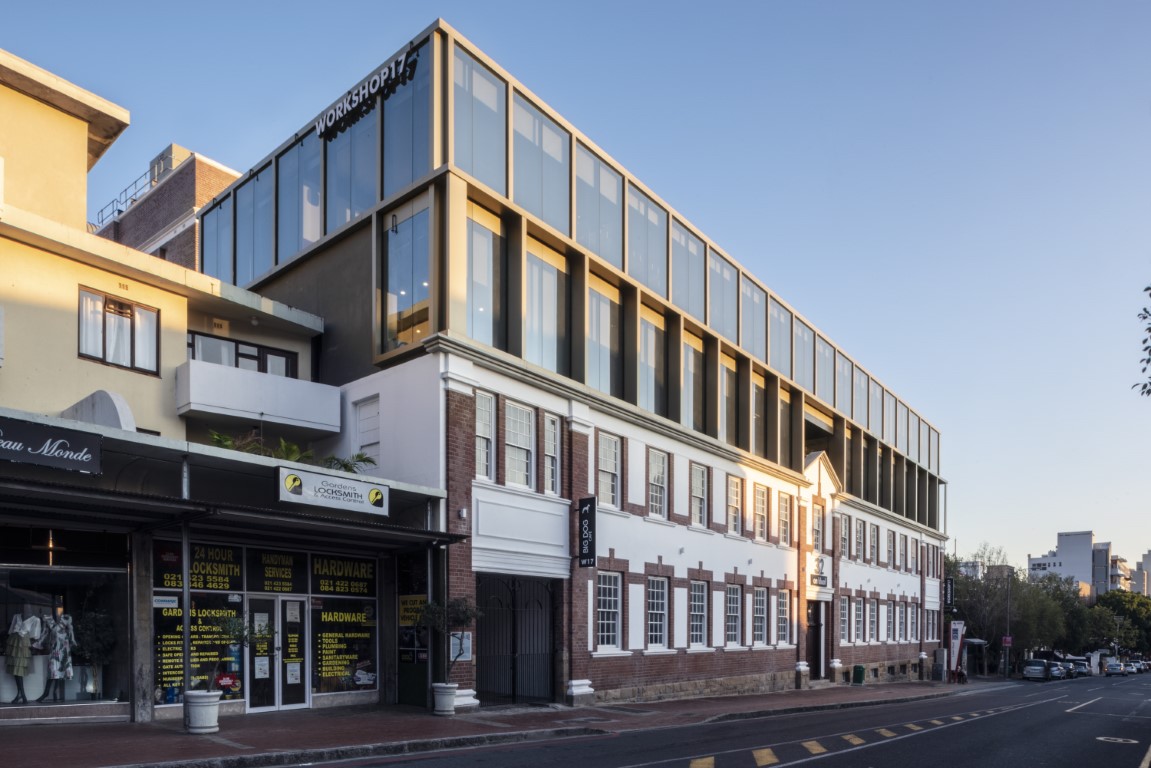 32 on Kloof is a heritage building recently transformed by multidisciplinary design studio – dhk Architects. The building’s transformation respects its rich history; applying contemporary aesthetics that references its existing heritage, rather than replicating it.

Prior, there was a need to establish a premise for manufacturing cigarettes and tobacco products in South Africa. UTC acquired portions of the former Nooitgedacht farm on the doorstep of the historic Company’s Gardens. This saw the construction of several buildings in 1900 and 1922 that formed the UTC Campus. It comprised a warehouse, a factory and other staff facilities.

The restoration project comprises a collection of historic red and white buildings in the 112-year-old Western Cape precinct; recognized as heritage buildings to be protected and preserved.

The Longkloof catalyst project is expected to invigorate the area by providing new commercial and retail spaces – including a 150-key Canopy by Hilton hotel, and secure pedestrian routes linking Kloof Street to Cape Town’s CBD.

dhk Architects’ concept for 32 on Kloof

The client’s vision was to make 32 on Kloof an attractive front face for the Longkloof’s catalyst project. According to the client’s brief, 32 on Kloof was to provide additional and premium rentable space. Two floors were added to the existing building, maximizing the floor area, with features that would reinvent the windowless basement.

dhk Architects took a hybrid approach. They respected the buildings’ heritage; and contrasted the building’s existing order and rhythm with a new contemporary addition. According to the architects, “This concept birthed a continuous dialogue between heritage and contemporary elements, thereby, producing a hybrid of architectural styles that politely enhance the building’s street presence.”

32 on Kloof introduces a contemporary addition

dhk Architects removed the red-tiled hipped roof added in the 1990s to cater to new spatial requirements; and replaced it with glazed two-story orthogonal floors. This addition increased the building’s height and the amount of commercial space.

This glazed façade of the new floors created a vertical contrast between the old and new, while it showcases the property’s enviable Table Mountain and City Bowl views. It modernizes the streetscape in a striking yet respectful way; also serving as an indicator of the upgrades occurring behind the building.

The two-story annex building was demolished to create a sunken courtyard. After demolishing, the ground was lowered to align with the existing basement level to unify both spaces.

The retaining wall of the basement was brought down and replaced with a glazed façade, offering a beautiful view of the new courtyard, and an indoor-outdoor experience. A café located in the courtyard and basement engages the local community. It forms an exciting new hub of activities.

Another significant change was moving the vertical circulation – the contemporary glass-clad lift and stair core – from inside the building to the sunken courtyard. Moving them outside created additional floor space within the building, as well as “the opportunity for an open-plan layout with a potential split tenant”.

According to dhk Architects, “this maximized the usability and quality of the rentable office area without detracting value from the historic building.”

The building is currently occupied by Workshop17 – a provider of co-working spaces. It consists of; 30 private offices, 9 meeting rooms, 3 boardrooms, a seminar room, an event hall and bar, 6 lounges and libraries, a courtyard and café.

Want to get your project published? GET STARTED HERE

Next
Preparing the Basement of Your New Home