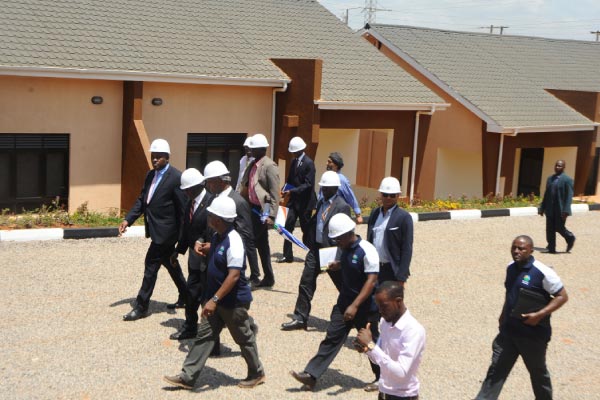 Uganda government officials inspecting the progress of the housing estate built by the National Housing & Construction Corporation in Namungoona recently. Architects are instrumental in the country’s quest to provide low cost houses to its people.
NEWS

How Architects Can Help Provide Affordable Housing For Uganda

WORDS BY DOREEN ADENGO [via the monitor]

Architects practicing in Africa face the challenge of persuading their clients and the wider society that professional work improves the cities we live in. Typically, during the design phase of a project, I have found that my role as an architect goes beyond designing. I must explain the importance of having an entire technical team on board, including engineers, quantity surveyors and land surveyors who are required to produce high-quality set of technical drawings, commonly referred to as just ‘the plan’. In Uganda, there is an expectation that the architect wears all these hats simultaneously.

Another common misconception is that the architect is no longer needed during the construction phase. The builder/construction manager is often thought to be the only person required at this stage in the process. In fact, however, changes are made during construction, including shortcuts that may lower the quality of the outcomes; the result of which can be seen in the recent building collapses in Kampala. More commonly, however, changes are made that deviate from the original design intent, and the result disappoints the client. Ironically, in Uganda, architects are expected to play too broad a role in the initial design process, but too small a role during construction.

According to the Uganda Bureau of Statistics, the country has a population of approximately 38 million, and an annual population growth rate of 3.3 per cent. A major concern, however, is that the population is increasingly becoming young and urbanised. Kampala has a population of 2.2 million during the day and 1.3 million at night. The city is fast developing with an annual urban growth rate 5 per cent. According to Mr Parity Twinomujuni, the chief executive officer of the National Housing and Construction Corporation (NHCC), Kampala has a housing shortage of 200,000 units. The shortage is growing at a rate of 5 per cent per year. A low-cost house of $15,000 (Shs54m) is only affordable to 20 per cent of the population that needs housing; the rest of the housing would need to be social housing, those provided by the government. This means 160,000 units would need to be social housing.

Mr Twinomujuni’s conclusion is that NHCC is interested in partnering with architects who are passionate about solving the challenge of affordable housing. Africa is one of the fastest urbanising regions in the world, and as a result we are seeing profound environmental and social changes. The architect’s role is evolving along with this change. It must include not only the technical skills but also the newfound relevance as advocates for design solutions that take specific context into account. In other words, architects are increasingly helping to shape whole cities’ function, not simply designing buildings.