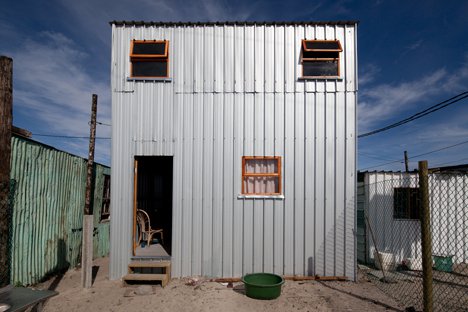 [dropcap size=big]T[/dropcap]he Empower Shack project is directed by Urban-Think Tank and the local NGO Ikhayalami in collaboration with the BT-Section community and associated local and international partners. The project aims to develop a comprehensive and sustainable informal settlement upgrading through addressing there core components:

The first prototype of the Empower Shack was unveiled in a design-and-build workshop in Khayelitsha, a township in Cape Town that is one of the largest in South Africa. The prototype is a low-cost two-storey shack for one of the township’s local residents, Phumezo Tsibanto and his family. The team worked together to replace Tsibanto’s existing single-storey dwelling with the new two-storey structure, giving the family a new home with a watertight exterior and its own electricity.

The designers are now exploring different configurations of the prototype that will allow it to adapt to the needs of different residents, extending up to three storeys when necessary.

This in turn becomes part of a wider strategy for rationalising the layout of the entire community, known as blocking out. This involves creating access routes for emergency vehicles and providing basic services such as sanitation and water.

“Our work on the Empower Shack project is not the result of the usual architectural pursuit for a new housing typology, …While we are absolutely trying to innovate upon the design and technology of low-cost housing, we’re more concerned with the general ‘system’ that surrounds housing in the context of informal South African settlements….This includes the infrastructure that makes housing decent, such as power and sanitation, along with the urban configuration of homes. The Empower Shack project seeks to address these larger challenges, and in doing so, hopefully changes not just the built landscape of places like Khayelitsha, but also the social, political and economic structures that shape residents’ lives.”

The ongoing pilot phase is focused on a cluster of 68 houses within the BT-Section of Khayelitsha to be completed this year, 2017. You can find out more information and view more images on the team’s official website.

Next
Our visit to the Alter Native Artists Initiative (A.N.A.I) Compound in Lagos by Ade Shokunbi