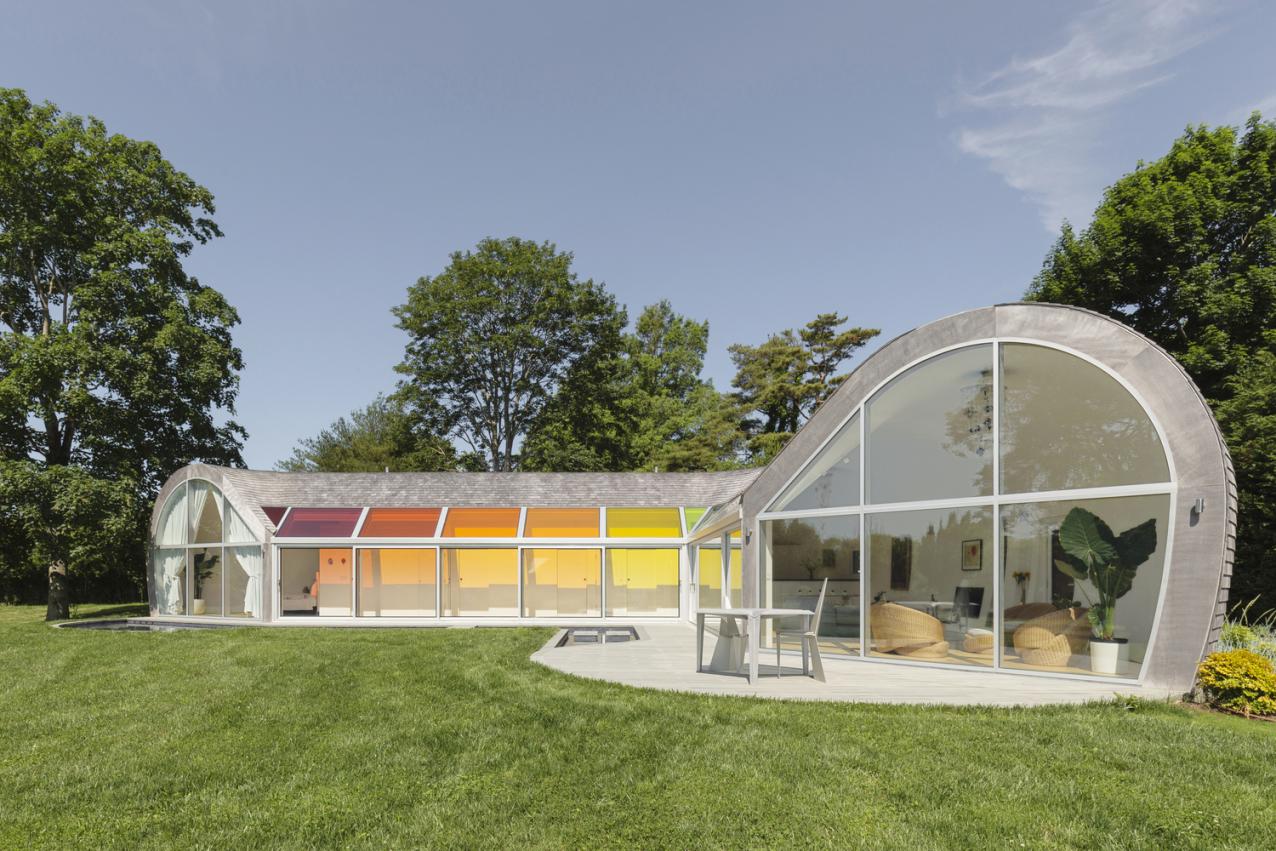 Designed by Nina Edwards Anker, founder of the New York based nea studio, the L-shaped, LEED-certified home covers 160 sqm and features 4.8m high ceilings. The name ‘cocoon’ takes direction from the home’s rounded walls which provide both shelter and privacy in contrast to the adjacent glass facade that offers views of the surrounding garden as well as passive heat gain. Its location within a historic neighbourhood, informed the used on cedar shingle cladding on the exterior facade while the use of modern environmental technologies help align the home with the existing site conditions.

This LEED-certified cottage, located in Long Island, New York, is called Cocoon because its round walls form a Cocoon shape towards the northern and western neighbors. This rounded enclosed half of the house provides shelter and privacy. The other glass side of the house, facing south, takes in ocean breezes and open views. By tuning in with given site conditions, and with the help of environmental technologies such as photovoltaic panels, the architectural design serves both the environment and wellbeing. There is no structural steel, only timber, which is advantageous both for the natural surroundings in terms of carbon emissions, and for human lungs. One story high and relatively small in footprint, the cottage is dwarfed by the surrounding trees; the cedar shingle cladding that wraps the house blends in with the existing traditional architectural material palette of the historic neighborhood. The cottage is split in two: ‘cocooned’ into a soft opaque shape that provides privacy, and ‘transparent and crystalline’ to allow for views onto an undisturbed landscape.

Its L-shaped 1730 square foot footprint is shaped by the legal restriction to build at a 150-foot radius from the wetlands and to keep a 35-foot distance from the adjacent properties. Luckily, the view of the greenery towards the ocean faces south and east, so that the southern glass façade provides both views and passive heating gain. The thermal masses of the thick northern/western walls retain heat while providing privacy. The initial diagram expresses the given parameters in a structure that is half closed and half open, half curved and half crystalline.

The large unbroken sliding doors connect inhabitants with the smells, feel and sounds of the garden and ocean in the distance. In a structure that partakes in the natural landscape, a comfortable temperature is primarily achieved through passive strategies. The sliding doors open to catch prevailing southern breezes from the Atlantic Ocean that temper the heat in the warmer months. In the winter the glass facade collects heat from the southern sun, and in summertime interior shades/curtains cut 50 percent of the solar heat gain.

Formed around site parameters and geographic constituents, Cocoon stems from the architectural tradition of working intimately with nature, which is rooted in a Norwegian seventy-year-old heritage. Having worked in Norway for seven years, I’m influenced by Norwegian architects Knut Knutsen (1903-1969), followed by Sverre Fehn (1924-2009), who played key roles in establishing this tradition of building with nature.

Cocoon is shaped by natural site constituents, including regulated setbacks and orientation according to prevailing breezes and sun movement. Also in the tradition of Fehn, who geometrically adapted his architectural structures to the dimensions and type of landscape that harbored them, such as rocks and trees, the cottage is formed by the surrounding geography, trees and wetland.

The site map shows how the L-shaped footprint of the cottage is shaped by the adjacent wetland, while it also shapes uncharted territory by embracing a central terrace and reflecting pool. With the guidance of a framework of extensive regulations imposed on wetland areas in Long Island since the occurrence of Hurricane Sandy, the cottage can work with the site rather than compete with it. The cottage does not attempt to fight the wetlands and its potentially destructive flooding with pump systems and moldy basements as is typical in the area; rather, it respects the nature of the site by raising the structure above the wet zone. The design works not only with but also against natural conditions such as cold and humidity, by adhering to basic Passive House principles, such as thick insulated northern walls.

Effective environmental technologies serve affective experiences in this LEED certified house. For example, the materiality of the reflecting pool/cistern connect the viewer to the primal elements of sunlight and water. The flat sheet of reflective water running along the eastern and southern edges of the L-shaped Cocoon soften the boundary between interior and exterior.

The materiality of the pool and sliding doors dissolves as they bounce reflections off one another while mirroring fragmented views of the sky and surrounding landscape. The reflecting pool/cistern is consistent in its double technological and perceptual roles. In addition to serving the purpose of soothing reflectivity and projecting moving water light patterns onto the white walls, the cistern plays three more practical roles.

It obtains LEED points by collecting more than 50% of the roof rain run-off to recycle for garden irrigation; it increases luminosity levels, which improves the efficiency of the solar-powered chandeliers above; additionally, it acts as a cooling element in summertime. A few modest air handlers (the types commonly used in Passive Houses) heat and cool the house, allowing the body to move between moderate swings in temperature and humidity levels; the shocks of cold air conditioning when coming in from the hot outdoors in the summer, and the excess of dry air from the heater in wintertime are avoided.

In the aim of achieving thermal comfort, the warmth of the southern sun is collected in the thermal mass of the back wall. Also, the sun studies show that the skylights play an important role during winter, spring and fall afternoons when the only direct sunlight entering the house is through the southern facing skylights. An energy efficient wood-burning fireplace with glass cover heats the main living area through a grill in the wall.

The mechanical system is minimally sized in accordance with Passive House principles. Architectural details that are in accordance with LEED or Passive House standards are coordinated with the mechanical engineer in order to size the HVAC system appropriately. Rather than acquiring a standard oversized HVAC system for a leaky building, as is typical in this area of Long Island, we worked together to design a mini-sized HVAC system for a well-insulated structure.

The mechanical engineer and architect collaborated to distribute and select materials to lower humidity indexes, improve air-tightness and ventilation. Necessary features for this humid continental climate are vent fans in the kitchen/bathrooms, house plants, and well-insulated crawlspace and ducts. Since the majority of moisture gets into a wall assembly via air leakage, for long term durability, the cottage follows the motto, “build tight and ventilate right”. The closed cell spray foam forms a continuous air barrier and the energy recovery ventilation system provides a continuous supply of fresh air, which maintains healthy indoor air quality.

The sensual experience of the sun in a structure that is half opaque and half exposed guides the framework of the design. In the half of the cottage that is crystalline and transparent, sunlight filters through the translucent colored skylights, reflects off of the water cistern and enters through the glass facades. The skylights above the hallway of the bedroom wing are based on the color theory of Goethe, used by J.M. William Turner in his 19th c. paintings of sunlight. The colors range from vermilion red, which signals sunset and rest, above the master bedroom, to deep yellow, which signals zenith and activity, nearest the living room.

Geometric patches of colored sunlight from the skylights and glimmering water reflections from the reflecting pool/cistern project onto the interior thick white ovoid back wall, which is punctured by just a few small windows.

The changing daylight on the round projection screen connects to solar rhythms throughout the day, directing attention to biorhythms in the passing of seasonal and diurnal cycles, marking hours through slowly moving light patches. It serves as a cinematic screen, its round shape abstracting the play of light and shadow, cocooning the interior like an ocean wave with light hitting its surface. The curved shape of the wall increases the abstraction and graphic impact of
the play of sunlight, so that the transient light and shadow patterns will become part of the architecture.

Many forms of indigenous shelter such as the Mongolian Yurt and Navajo Hogan were round in shape. This ovoid geometry that is often found in the natural environment has been scientifically proven to contribute to making buildings more energy-efficient and comfortable. Round buildings also use 15 to 20% less material than a rectangular building to create the same square footage because they save on wall, floor and roof materials. Additionally, the round shape of the house circulates breezes efficiently, as no air gets trapped in the corners. In conjunction with the cool air coming off the cistern at the foot of the opened sliding doors, the circular movement of cool air from the prevailing incoming direction of the ocean breeze serves as an effective passive cooling method.

The thermal dynamics of the circulating air work as follows: heated air rises until it meets the insulated ceiling, then hits the cooler skylight; the air consequently pushes down to the floors, moves across to meet the wall/ceiling, rises up to the skylight and moves down to the floor again. The cycle continues to constantly circulate the air and temperatures in the house.

Lastly, the curve softens the sounds inside the building, making ideal acoustic conditions for resting, socializing and listening to music. Because sound waves dissipate as they wrap around the building, the shape also prevents noise from penetrating in from the outside.

Previous
Inside the $350 million Sustainable City in Dubai